The House of Stewart (or ‘Stuart’ as it later became) was established by Robert II of Scotland during the late 14th century and the Stuart rule spanned from 1371 to 1714. Initially rulers of Scotland only, the dynasty also went on to inherit the Kingdoms of England and Ireland. However, despite the longevity of the Stuart reign and Scotland’s prosperity and modernisation during the beginning of the Renaissance, the monarchs of the House were not without their failings. These led to a number of murders, beheadings and forcible removal from the throne during the English Civil War to name but a few!

The first of the Stewart kings, Robert II, was born to Walter, 6th High Steward of Scotland and Marjorie Bruce, daughter of Robert the Bruce. He was 55 years old when he inherited the throne from his uncle David II in 1371. He was a very passive person with no love of war, so he let his son John, Earl of Carrick (later known as Robert III) rule instead. He died in 1390 of infirmity.

The second of the Stewart kings, Robert III was considered illegitimate by the Church as his parents were so closely related but was legitimised in 1347 by papal dispensation. Seriously hurt following a kick from a horse in 1388, he never fully recovered from his injuries. He was considered a feeble or weak king and allowed his advisor the Duke of Albany to take control. His sons both suffered horrible fates as one, David, was starved to death in a prison at Falkland Palace (some say on the orders of Albany) and the other, James I, was captured by pirates and given to Henry IV of England. Robert died supposedly of grief, saying “I am the worst of kings and the most miserable of men.” He suggested that he should be buried in a rubbish heap, but was actually buried in Paisley Abbey!

James I was born on 25 July 1394 in Dunfermline and became king at the age of 12. In an attempt to keep James away from his uncle, the Duke of Albany, James was sent to France on his accession in 1406. Unfortunately his ship was captured by the English and James was taken prisoner and handed over to Henry IV. He was held prisoner for 18 years before finally taking control of Scotland in 1424. The Duke of Albany remained in charge of Scotland as Governor until his death in 1420 when he was succeeded by his son Murdoch. Upon his return to Scotland, James had Murdoch and several other powerful nobles beheaded. Subsequent laws restricted the power of the nobles. This did not please the nobles, especially the Earl of Athol and Sir Robert Graham, and in 1437 they broke into a party the King was hosting in Blackfriars, Perth, and murdered him. James II was only 6 years old when crowned king at Holyrood Abbey in 1437. James was known as the ‘king of the fiery face’ because of a birthmark but perhaps the ‘fiery king’ would have been more appropriate, given the king’s temper. William, Earl of Douglas, one of the most powerful nobles in Scotland but also a troublemaker and dissenter, refused the king’s command to ‘toe the line’, and was murdered by James with a dagger in a fit of rage! James was particularly keen on the new weapon of war, the cannon, and at the Siege of Roxburgh Castle where cannons were used for the first time it was ironic that one of them blew him up as he stood close by watching.

James III was only 9 years old when his father met his untimely death. Unfortunately, James had a weakness that was ultimately to lead to his own death: he had favourites upon whom he would lavish money, land and gifts. This incensed the nobles: they even imprisoned James at Edinburgh Castle. The nobles succeeded in setting father against son and at the beginning of the battle of Sauchieburn on 11 June 1488, James III, not a good rider, was thrown from his horse and injured. Taken to the nearest building, a priest was called to the king: however the man claiming to be the priest stabbed the king through the heart and then fled before he could be identified.

James IV was racked with guilt about his father’s death at Sauchieburn and did penance every year on the anniversary of the battle. He was a very clever, learned man, if not so lucky in love. James was in love with Margaret Drummond of Stobshall when it was proposed to him that a marriage to Margaret Tudor, daughter of Henry VII would improve Anglo-English relations. The untimely death of Margaret Drummond and her two beautiful sisters by poison just after the marriage was proposed, opened the way to the alliance some 18 months later. However the marriage did not bring lasting peace. James was personally annoyed with Henry VIII, now king of England, because he had refused to send on jewellery that was part of Margaret’s marriage dowry. Publicly he was also angered because Henry had seized two Scottish ships without reason. When Henry then invaded France in 1513, the Auld Alliance was reintroduced with Louis XII of France. James invaded northern England and The Battle of Flodden was fought on 9 September 1513. James made a fatal error by choosing to advance down a steep slippery slope towards the English forces. His troops slid down the slope in total disarray and were picked off almost at will by the English. James himself was also killed. 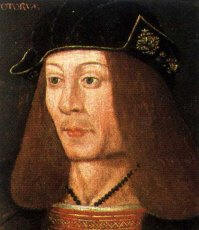 James V was just 17 months old when James IV was killed. His mother Margaret ruled as Regent, followed by the Duke of Albany who took over as Guardian of the Realm, ruling wisely until his return to France in 1524 when fighting broke out between the Scottish nobles. James spent the first 14 years of his life being passed around from place to place until in 1526 he was imprisoned in Falkland Palace, finally escaping in 1528 to begin his rule at the age of 16. He ruled well to begin with but became tyrannical and obsessed with wealth in later years. His second wife Mary of Guise gave him two sons who died in infancy. She gave birth to Mary in the very same week as James lay dying in Falkland Palace, following a nervous collapse after defeat at the battle of Solway Moss.

Mary Queen of Scots was just 6 days old when her father died. Her mother Mary of Guise acted as Regent for her daughter during the turbulent years after her father’s death. At the age of 5, Mary was betrothed to Francis, son of Henry II of France, and sent away to live in France. She is said to have changed the spelling of “Stewart” to “Stuart” during her time in France. A detailed account of her life can be found here. Suffice to say that her tragic life came to an end when she was accused of treason and beheaded by her cousin, Elizabeth I of England, in 1587.

With the death of Queen Elizabeth I the Union of Crowns was introduced and Mary’s son James VI of Scotland became James I of England.