The Puckle Gun, or Defense Gun as it was also known, was invented and patented in 1718 by the London lawyer James Puckle. This early automatic weapon was rather bizarrely designed to fire round bullets at Christians and square bullets at the Muslim Turks. Square bullets were believed to cause more severe wounding than round ones, and according to the 1718 patent, ‘would convince the Turks of the benefits of Christian civilisation’.

To see why the Turks were specifically targeted, we have to look at this invention in the context of the time. By the turn of the 18th century the powerful Ottoman Empire controlled much of southeast Europe, western Asia and North Africa, and was now engaged in a series of wars with European powers. The Turks were starting to push into Eastern Europe, converting the conquered Christian population to Islam.

The Ottomans also controlled much of the southern and eastern Mediterranean coastline. Using small fast boats, the Turks were constantly raiding and boarding foreign ships, much like Somali pirates today. These small vessels were too fast for broadside cannon to be used effectively against them. 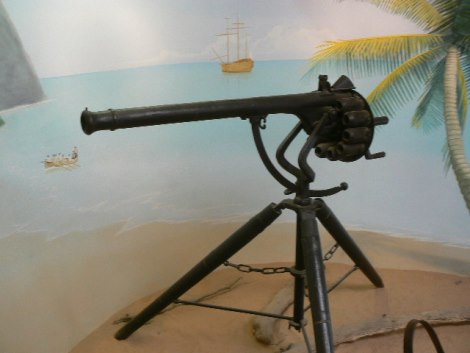 Puckle’s gun was designed to prevent just such a boarding of a ship at sea. A single-barrelled flintlock weapon fitted with a multi-shot revolving cylinder, this portable revolver-type gun was mounted on a tripod. At the time the gun was patented in 1718, a musket could be loaded and fired 3 times a minute. The vastly superior Puckle Gun fired nine shots per minute and was the world’s first machine gun.

In 1717 it underwent trials at Woolwich but was rejected for government use, one reason being that the flintlock mechanism was too unreliable. This did not however deter Puckle from patenting the machine and then setting up a company in 1721 to market the gun. Ahead of its time in concept, it could not overcome the handicap of 18th century flintlock technology. The Puckle Gun failed to attract investors and was not a commercial success.