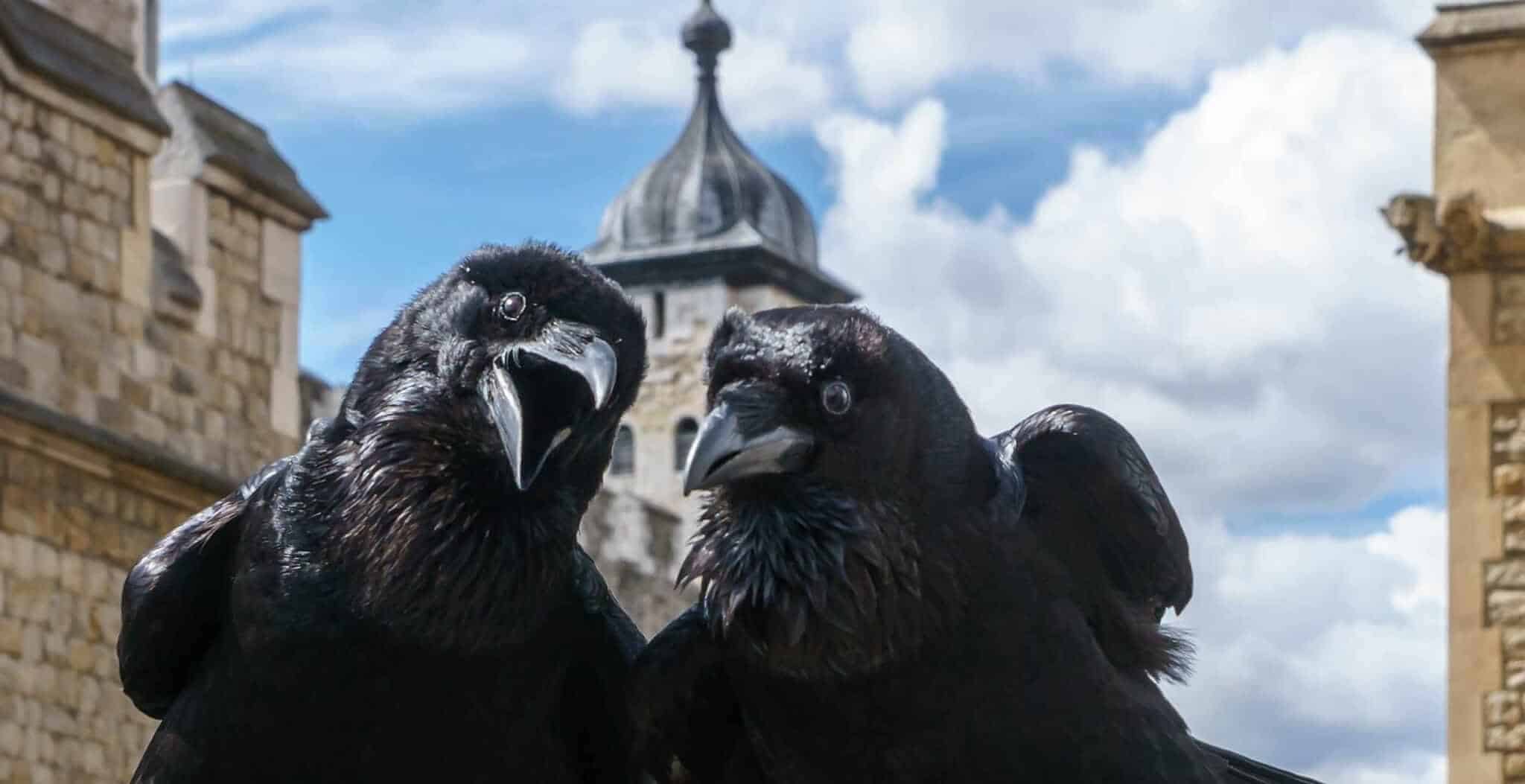 It is not known when the ravens first came to the Tower of London, but their presence there is surrounded by myth and legend. Unusually for birds of ill omen, the future of both Country and Kingdom relies upon their continued residence, for according to legend, at least six ravens must remain lest both Tower and Monarchy fall.

The first Royal Observatory was housed in the north eastern turret of the White Tower. Legend has it that John Flamsteed (1646 – 1719), the ‘astronomical observator’ complained to King Charles II that the birds were interfering with his observations. The King therefore ordered their destruction only to be told that if the ravens left the Tower, the White Tower would fall and a great disaster befall the Kingdom. Sensibly the King changed his mind and decreed that at least six ravens should be kept at the Tower at all times to prevent disaster.

The Ravenmaster Chris Skaife is a Yeoman Warder or ‘Beefeater’ dedicated to caring for the Tower’s unique Unkindness of Ravens. There are seven ravens at the Tower today ( the required six plus one spare!) Their names are Jubilee, Harris, Gripp, Rocky, Erin, Poppy and Merlina. Their lodgings are to be found next to the Wakefield Tower.

The ravens consume 6oz. of raw meat and bird formula biscuits soaked in blood each day. They are very partial to an egg each once a week plus the occasional rabbit which is given to them whole as the fur is good for them! They also enjoy scraps from the mess kitchen at the Tower – they particularly like fried bread!

To prevent the birds flying away one of their wings is clipped by the Ravenmaster. This does not hurt the raven nor does it harm them in any way. By unbalancing their flight it ensures that they don’t stray too far from the Tower.

Escape from the Tower!

However despite the wing clipping, there have been occasional escapes. One such escapee was Grog, who was last seen outside an East End pub called the ‘Rose and Punchbowl’ in 1981. Although he had been at the Tower for 21 years, Grog obviously felt he needed a change of scene!

Occasionally ravens have to be dismissed for bad behaviour. This happened to George who received his marching orders in 1986 after he developed an unhealthy taste for TV aerials:

Ravens can live to a very ripe age. The oldest raven to live at the Tower was called Jim Crow who died at the age of 44. The newest raven at the Tower is Poppy, who arrived in May 2018. The fortunes of the Tower Ravens reached their lowest point just after World War II when only Raven Grip was left at the Tower. It is believed that the birds were upset by the continuous bombing of London. There is also the suggestion, although it has never been proved, that one raven, Mabel, was kidnapped!

Since 1987 the Tower has undertaken a successful breeding programme for the ravens. Charlie and Rhys paired up and produced a total of 17 chicks.

The Tower of London

Founded by William the Conqueror in 1066-7 and enlarged and modified by successive sovereigns, today the Tower of London is one of the world’s most famous and spectacular fortresses. During its 900-year history it has been a royal palace and fortress, prison and place of execution, mint, arsenal, menagerie and jewel house. Getting here
The Tower is easily accessible by bus, boat and rail, please try our London Transport Guide for further information.

With thanks to HM Tower of London and Historic Royal Palaces

Guest writer John Owen Theobald meets the Ravenmaster of the Tower of London, and discovers just what it means to hold the fate of the kingdom of Britain in his hands...