After they invaded Britain in AD43, the Romans quickly established control over southern England. The conquest of the ‘wild barbarians’ in the North however was not going to be so easy.

In the AD70’s and 80’s the Roman commander Agricola led a series of major assaults on the barbarian tribes of northern England and the Scottish lowlands. Despite a successful campaign into Scotland, the Romans failed in the long term to hold on to any lands gained. Forts and signal posts were built back in the lowlands linked by the Stanegate road which ran from the waters of the Tyne in the East to the Solway estuary in the West.

Some four decades later in around AD122, with the barbarians still untamed, these lowland forts were again under intense hostile pressure. A visit by the Emperor Hadrian that year to review the border problems at the boundaries of his empire led to a more radical solution. He ordered the building of an immense barrier stretching over eighty Roman miles from the west coast of Britain to the east. Built of stone in the east and initially of turf in the west (because lime for mortar was not available) Hadrian’s Wall took at least six years to complete. 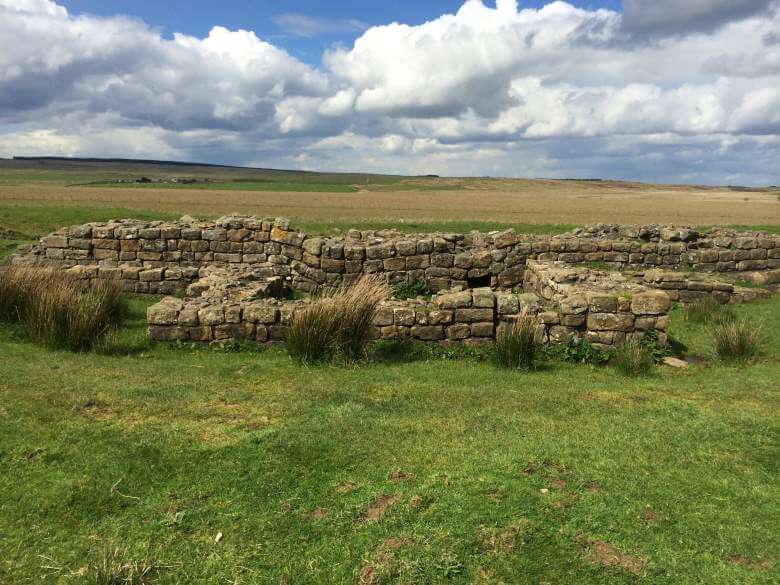 Above: Milecastle 35 (also known as Sewingshields)

Approximately 10ft (3m) in width and 15ft (4.6m) in height, with a parapet on the north side giving an overall height of 20ft (6m), to potential invaders the structure emphasised the power and might of Rome. As if to reinforce this, 80 milecastles are spaced one Roman mile apart along its entire length.

By AD 138 the Romans, perhaps with a few scores to settle, again sought to civilise the northerners with a new campaign into Scotland. This time a new frontier, the Antonine Wall, was rapidly established between the Forth and Clyde rivers and Hadrian’s Wall was promptly abandoned. By about AD160 however the Romans were again persuaded by the Scots that they did not wish to be civilised and were forced to relocate back to Hadrian’s Wall. So concerned about the reception they had received in the north, the Romans undertook to replace the remaining stretch of turf wall with a more substantial stone structure. Above: A section of vallum (defensive earthwork) in the foreground, with the wall in the background.

The Romans maintained and occupied the Wall into the fourth century AD, resisting several further barbarian raids from the persistent northern tribes. Little is known of the effects on the Wall of the barbarian conspiracy when in AD367 hostile tribes from all over Britain attacked together. Shortly after this, drained of garrison troops by successive withdrawls, Hadrian’s Wall was finally abandoned.

Today, spectacular stretches of the Wall remain over some of the most rugged countryside to be found in the British Isles. Glimpses of Roman organisation, religion and culture remain in view along the Wall at the various forts, milecastles, temples, museums etc. Hadrian’s Wall is without doubt the most prominent and important monument left by the Romans in Britain. It captures dramatic images of a Britain divided by conflict and occupation.

Where to see the Wall

Hadrian’s Wall Bus – runs daily in the summer between Carlisle and Hexham stopping at visitor attractions along the route. Each bus connects with rail and bus services in Carlisle, Haltwhistle and Hexham. A knowledgeable and friendly guide is often aboard weekend services. Limited winter service. Contact: 01434 344777 / 322002

Roman Sites – Please click on the following link to view our interactive map detailing the Roman Sites in Britain. Standing at the easternmost point of Hadrian’s Wall and guarding the mouth of the River Tyne lies the remains of the Roman fort of Segedunum.