Druids occur in many mystical tales of Prehistoric Britain. In one, a Druid, Figol, threatened to bring fire to rage on his enemies and prevent the men and their steeds from going to the toilet! Their bodies would fill with urine! Of course, from our knowledge of the world today we know that this is impossible, but so many accounts of druids are riddled with mysticism, magic and possible exaggeration.

The origin of the word ‘Druid’’ is unclear, but the most popular view is that it comes from ‘doire’, an Irish-Gaelic word for oak tree (often a symbol of knowledge), also meaning ‘wisdom’. Druids were concerned with the natural world and its powers, and considered trees sacred, particularly the oak.

Druidism can be described as a shamanic religion, as it relied on a combination of contact with the spirit world and holistic medicines to treat (and sometimes cause) illnesses. They were said to have induced insanity in people and been accurate fortune tellers. Some of their knowledge of the earth and space may have come from megalithic times.

There is a lot of mystery shrouding the actual history of the Druids, as our knowledge is based on limited records. Druidism is thought to have been a part of Celtic and Gaulish culture in Europe, with the first classical reference to them in the 2nd century BC.

Their practices were similar to those of priests today, connecting the people with the gods, but their role was also varied and wide-ranging, acting as teachers, scientists, judges and philosophers. They were incredibly powerful and respected, able to banish people from society for breaking the sacred laws, and even able to come between two opposing armies and prevent warfare! They did not have to pay taxes or serve in battle. Druid women were also considered equal to men in many respects, unusual for an ancient community. They could take part in wars and even divorce their husbands!

One of the earliest accounts of Druids was written by Julius Caesar in 59-51 BC. He wrote it in Gaul, where prestigious men were divided into Druids or nobles. It was from the Roman writers that historians have gained most of their knowledge of the Druids. Druids were polytheistic and had female gods and sacred figures, rather like the Greeks and Romans, but their nomadic, less civilised Druidic society gave the others a sense of superiority. This renders some of their accounts historically uncertain, as they may be tainted with exaggerated examples of Druidic practices. Druidic human sacrifice was recorded but there is no definitive evidence to support this.

Within the Druid class, it is believed that there were subsections, all with colour-coded robes. The eldest Druid, or one deemed to be the most wise, was the Arch-druid, and would wear gold robes. The ordinary Druids would wear white and act as priests. The Sacrificers would fight and wear red. The blue Bards were artistic, and the new recruits to Druidism completed lesser tasks and were held in lesser esteem, wearing brown or black.

All aspects of Druidism were well structured and ordered; from the hierarchy of the Druid class, to their pattern of life that followed nature’s cycles. They observed lunar, solar and seasonal cycles and worshipped according to these on 8 main holy days.

They would celebrate New Year on Samhain, the day that we refer to as Halloween (31st October). This was when the last harvest would take place and it was a day full of mysticism and spirituality because the living and the deceased were the closest to being revealed to each other than on any other day.

Yule was the winter solstice, a time when Druids would sit on mounds of earth, for example at New Grange in Ireland, throughout the night, waiting for sunrise, when they would be reborn!

Imbolc (2nd February) involved using sheep’s milk by way of celebrating motherhood. Ostara was the spring equinox, and Beltane took place on 30th April as a festival of fertility. Litha was the summer solstice, a time when they believed that the ‘holly king’ took over from the ‘oak king’ of Yule. Lughnasa was the first harvest on 2nd August and Mabon was the autumnal equinox. Then the cycle of holy days would repeat itself again, reflecting the cycles of nature, planets and indeed life itself, as the Druids believed in reincarnation. They also believed that sins committed in a previous life could be made up for in the next. 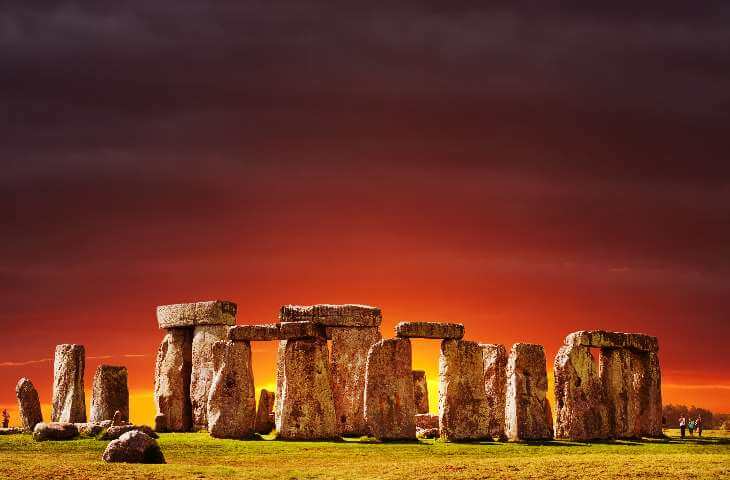 Their places of worship (‘Temples of the Druids’) were quiet, secluded areas, like clearings in woods and forests, and stone circles. Probably the most famous stone circle in Britain is Stonehenge, an ancient megalithic monument dating back to about 2500 BC. Most people’s first thoughts about the Druids might be of them congregating around Stonehenge and casting magical incantations. There is indeed thought that this was a place of worship for them, as it still is today for pagans and other neo-druids. There is disagreement though, about whether the Druids built Stonehenge or not. It is not clear exactly when the Druids came to Britain, but it is likely that they actually arrived after Stonehenge was built.

The Isle of Ynys Mon, Anglesey, and Wistman’s Wood in Dartmoor are both believed to be Druidic sites. Indeed, Anglesey was supposedly a place where Druids were taught. It took about 20 years to learn the lore, as it was complex and had to be learnt off by heart as they rarely used a written language. This is one reason why we know so little about them. The Gaul’s had a limited written language, involving Greek characters, and then with Caesar’s rule this became Latin and old records were lost. Some legends must also be treated with caution as they may have even been altered by subsequent Christian influence or exaggeration.

In the 1st century AD, Druids were facing oppression from the Romans. Indeed, Tiberius banned Druidism because of the supposed human sacrifices. After this, in 2nd century, Druidism appeared to end. There are a couple of theories to try and explain this. The first is that, as with many ancient societies, disease, famine or warfare could have wiped them out. The second implicates the arrival of Christianity in the decline. Might they have been converted? In the 1700s though, a Druid revival occurred in England and Wales. The famous William Blake (an Arch-druid) even took part in this.

Some religions today, like Christianity and Wicca have been influenced by Druidry. The number three was considered greatly significant in Druid lore, and also by these religions. For example, the Triscale was a symbol involving 3 lines coming together to form a circle. Circles were key to many Druid beliefs; the circle of life, the seasons, light and darkness.

It would surprise many to learn that Winston Churchill was supposed to be a Druid! The National Eisteddfod of Wales – completely unique in Europe – is the largest celebration of Welsh culture, music and poetry.