Whilst the first written mention of whisky appears in the Exchequer Rolls of Scotland in 1495, the exact origins of when whisky was first produced in Scotland are lost in the midst of time. It is known however that the ancient Celts were keen producers, and even more enthusiastic consumers, of the ‘the water of life’. For centuries it has been claimed that whisky has mystical medicinal powers sufficient to cure colic, smallpox and many other common diseases and ailments. Others simply believed it to be an effective in-built central heating system to help survive those long cold Scottish winter nights.

It was following the Act of Union in 1707 that the English set out to bring to heel the rebellious Scots. A quick and easy target saw whisky production taxed for the first time. Taxes climbed ever higher and with it the number of illegal stills increased proportionally.

Smuggling quickly became commonplace in Scottish society and at the beginning of the 19th century it is reckoned that as many as 14,000 illicit stills were being confiscated by the excisemen each year. It is said that more than half the whisky drunk in Scotland at that time was contraband.

The Excise Act of 1823 saw an end to this illicit trade. This Act permitted the distilling of whisky in return for a £10 licence fee and small payment per gallon of spirit produced.

The popularity of the whisky was helped greatly in the 1880’s by a little black bug – the phylloxera beetle. This little charmer single-handedly wiped out many of the vineyards of France. Brandy became near impossible to get and seasoned drinkers readily developed a taste for a ‘dram’ of Scotch.

The ingredients of whisky are unique to Scotland itself: Fields of golden barley, an abundance of clear pure water and rich and thick earthy peat cut from the moors. A tour of one or more of the many Scottish distilleries will provide an in-depth insight into the art of whisky making. 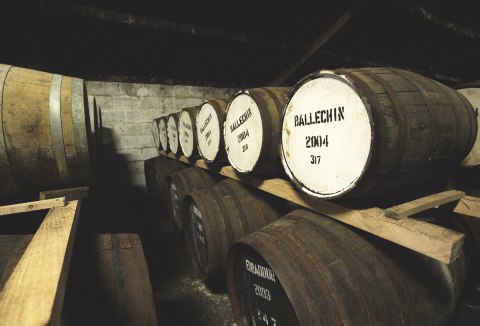 There are two types of whisky: single malt and grain, the latter being faster and cheaper to produce. Most of the popular brands are blends of both types of whisky – usually 60 – 70% grain to 30 – 40% malt. These blended whiskies account for over 90% of all whisky sales. Most of the single malt produced is used to flavour the blended brands, such as Bells, Teachers, Famous Grouse, etc.

Single malts are a different matter altogether. Each is distinctively different with the finer nuances of flavour and aroma deriving from the peat used for drying, the type of oak casks used for maturing and the water used for mashing. Whilst it is perhaps just about acceptable to use mixers, such as soda or water with blended whiskies, single malts can only be fully appreciated when drunk neat.

There are four groups of single malts, including Highland, Lowland, Islay and Campbeltown. The banks of the River Spey on the eastern side of the Highlands are home to around 50 distilleries with many of these offering guided tours and the chance, of course, to sample their produce. The malts of Speyside (Glenlivet, Glenfiddich, Tambhu, etc.), are noted for their elegance and complexity whilst the malts from that most beautiful Isle of Islay (Laphroaig, Bowmore, etc) are lovingly described in terms of their peaty quality – the choice is yours!

Discover the origins of British and English Pubs and Inns...