Welcome to Part One of our Arms and Armour series. Starting with the Ancient Britons, this section covers armour and weapons through the Iron Age, Roman era, Dark Ages, Saxons and Vikings, up to the Norman Conquest in 1066. 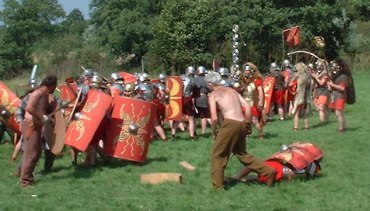 Battle re-enactment between the Romans and Boudicca’s Iceni.
(EH Festival of History)

Note how the Roman shields have became curved and longer, in order to hug the body and better protect the soldier. Here you can see in more detail the later Roman armour and weaponry. Note the helmet or cassis. As well as cheek protectors, the helmet has a guard to protect the back of the neck and a ridge running along the front of the helmet to protect the head from sword blows. As well as the sword the soldiers are also carrying a spear (pilum) and a dagger (pugio). Roman boots were made from leather and studded with hobnails. Body armour was made from overlapping metal strips held together by leather strips on the inside, and hinged to allow the soldier to move more easily. Under the armour the soldier would wear a linen undershirt and a wool tunic.

Shield bosses are commonly found in early Anglo-Saxon cemeteries but helmets and items of body armour are exceptionally rare. The Sutton Hoo ship burial (7th century) is an exception and includes not only the famous helmet, sword and shield, but also a mail-coat which was so rusted it could not be restored.

Armour was very precious so it was probably passed down through the family rather like an heirloom would be today. Indeed by its design, the Sutton Hoo helmet may well have dated from the 4th century Roman era rather then the 7th century.