Just Nuisance, a Great Dane, is the only dog ever to have been officially enlisted in the Royal Navy. During World War Two between 1939 and 1944 he served with HMS Afrikander, a Royal Navy naval base in Simon’s Town, a pretty seaside town in South Africa.

In 1939, he was brought as a pup to Simon’s Town by his owner, Benjamin Chaney, who ran the United Service Institute which was a favourite hangout for sailors from the Royal Navy.

A very friendly dog, he soon became a familiar figure around the town, taken for walkies and treated to pies, biscuits and even beer by the sailors, to whom he became a kind of mascot. Naturally, the dog in turn became very fond of sailors – all sailors – and followed them everywhere, to the naval base, the dockyards and even on to the ships. Not a small dog – he was large even for a Great Dane – when he took to lounging about at the top of the gangplank, he blocked the way and that is how he got his name, ‘Nuisance’. 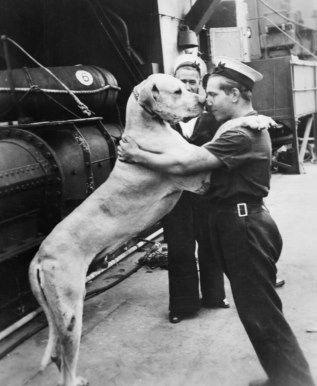 He often escorted drunken sailors safely back from the train or the pub to their bunks – even if they weren’t actually based in Simon’s Town!

However it was his habit of following sailors on to trains that really got him into trouble. When the sailors went on leave he liked to go with them on the train to Cape Town, some 22 miles away. Not having a ticket, the sailors used to try to conceal him from the Ticket Inspector but more often than not, he would be discovered and put off at the next station. Not a problem for Nuisance though – he would simply jump on the next train to complete his journey!

Exasperated railway officials sent demands to his owner, ordering him to keep the dog under control, pay his fares or have him put down. This incensed the naval community who had adopted this huge dog as one of their own.

Letters were written to the Commander-in-Chief of the Navy, who came up with the perfect solution: Nuisance would be enlisted into the Royal Navy. An enlisted man was entitled to free rail travel and so on 25th August 1939, Just Nuisance was signed up. His surname was given as ‘Nuisance’, first name ‘Just’: his trade was ‘Bonecrusher’ and his religion ‘Scrounger’. This was later changed to ‘Canine Divinity League (Anti-Vivisection)’. Nuisance signed his papers with a paw mark. Ordinary Seaman Just Nuisance was later promoted to Able Seaman to entitle him to free rations.

Although an enlisted sailor, Nuisance never went to sea. His duties did however include fund raising and raising morale. A seaman was allocated to Nuisance to ensure he was regularly groomed and to prepare him for appearing at parades wearing his seaman’s hat. He also famously ‘got married’ as a money raising stunt for war funds! However he was not exactly the model seaman, as his Conduct Sheet shows. He committed many minor misdemeanors, including riding the train without his pass, going AWOL, losing his collar, refusing to leave the pub at closing time and on one occasion, sleeping in an improper place, namely a Petty Officer’s bed. For this last misdeed he was denied bones for seven days. He was also prone to fighting, causing the deaths of two other Royal Navy canine mascots.

Unfortunately Just Nuisance had to be discharged from the Navy for health reasons on 1st January 1944. He had been involved in a car accident and developed a thrombosis which was slowly paralysing him. It was decided that the kindest thing to do would be to put him down and so on 1st April 1944 the Naval Surgeon put him to sleep. The following day he was placed in a canvas bag, covered with a white Royal Navy ensign and laid to rest with full military honours including the playing of the ‘Last Post’. A plain granite gravestone marks his grave at Klaver Camp on Red Hill behind the town.

A statue in Jubilee Square and a display of Nuisance’s papers and belongings (including his collar) in Simon’s Town Museum ensure that this wonderful dog, who stole so many hearts, is never forgotten. Situated just off the Mall in London, close to both the heart of British government and monarchy, lies the country’s…