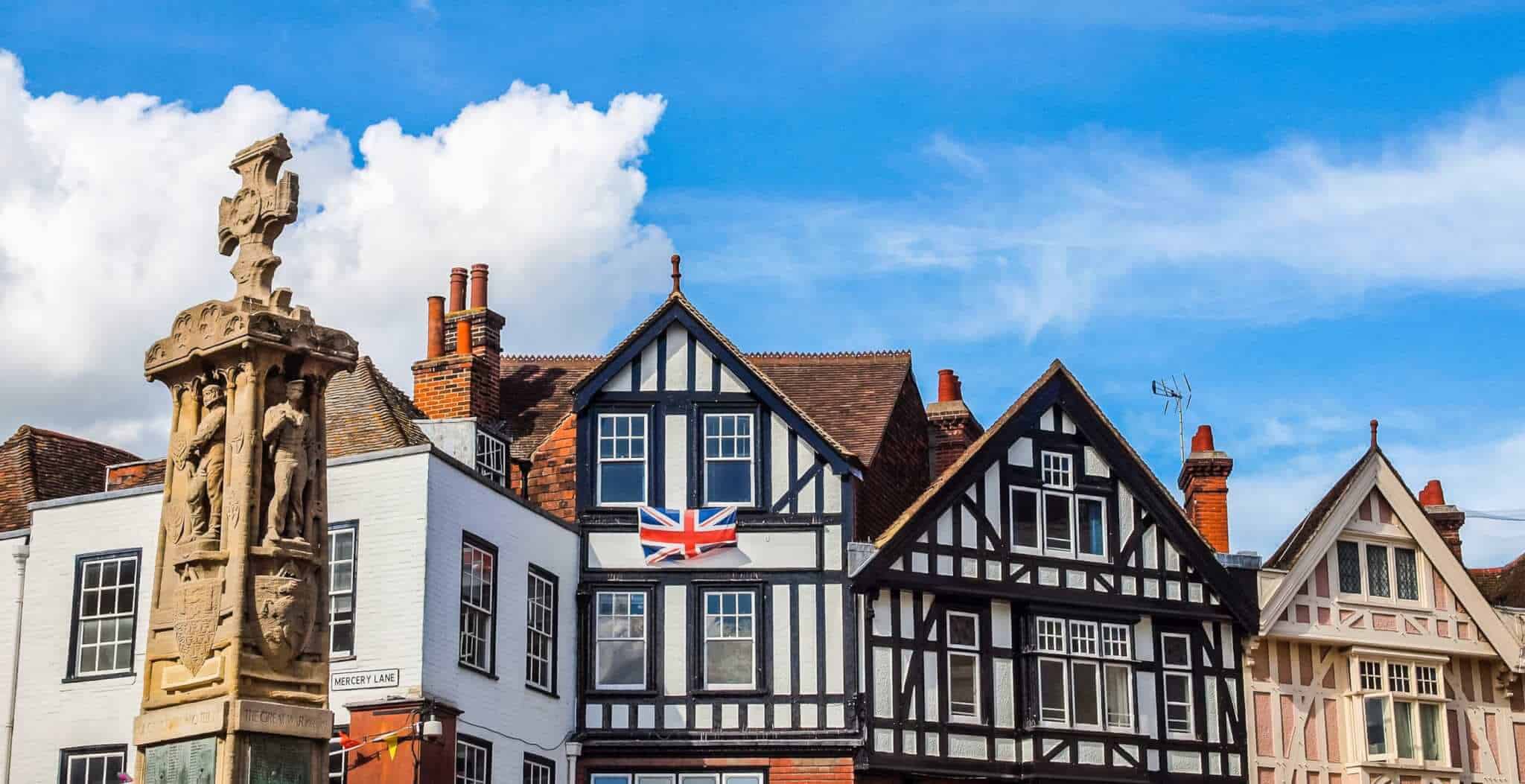 St Augustine was sent by the Pope in 597 AD to re-establish Christianity in southern England and came to Canterbury. Ruins of the monastery built by Augustine still remain and he founded the first cathedral in England where the present magnificent building now stands.

Canterbury has been a European pilgrimage site of major importance for over 800 years since the assassination of Archbishop Thomas Becket in 1170.

Today it is one of the most beautiful and historic cities in England. The medieval city centre bustles with famous name stores and exclusive boutiques while the picturesque side streets are home to smaller specialist shops, pubs and restaurants.

UNESCO has granted world heritage status to part of the city, including St Martin’s Church, St Augustine’s Abbey and the Cathedral.

The Norman cathedral still dominates the skyline as you approach Canterbury; giving 21st century visitors the same sense of awe as their medieval counterparts.

The city was one of the busiest places of pilgrimage in the medieval world and the Canterbury Tales Visitor Attraction takes you back to Chaucer’s England and the shrine of Thomas Becket, the murdered Archbishop of Canterbury. Chaucer’s Canterbury Tales have stood the test of more than 600 years and are known throughout the world. The pilgrims in the Canterbury Tales followed the Pilgrims Way to Canterbury, to worship and make penance at the tomb of the murdered Archbishop, Thomas Becket. Although there is no documented evidence that Chaucer ever came on pilgrimage to Canterbury, he must have known the city well through his many journeys from London to the Continent, as a King’s Messenger and minor Ambassador. As an important member of the powerful Duke of Lancaster’s household, Chaucer would almost certainly have attended the funeral of the Duke’s brother, the Black Prince, whose magnificent tomb is in the Cathedral.

The Canterbury Heritage Museum completes the story of the historic city with Invicta the engine that pulled the world’s first passenger railway and the locally created characters Rupert Bear and Bagpuss. Canterbury Museum’s New Medieval Discovery Gallery is packed full of exciting activities for all the family. Activities include piecing together Canterbury’s medieval buildings, recording finds like an archaeologist, sifting through medieval rubbish and smelling poo from a city cess pit! You can discover the colourful characters of medieval Canterbury – from Princes and archbishops, to ale sellers and washerwomen. Visitors can also learn about medieval food, Chaucer and the monastic life.

Canterbury has been home to poets and playwrights and an inspiration to writers of English literature through the centuries. Christopher Marlowe was born and educated in Canterbury and the family home of Richard Lovelace, one of England’s most romantic poets stands on the banks of the Stour. Rupert Bear was conceived in Canterbury and one of James Bond’s adventures created nearby. Chaucer’s Canterbury pilgrims are known throughout the world and Dickens chose the city as a setting for one of his most popular books. Today Canterbury still welcomes visitors from all four corners of the globe and has, with its many ancient buildings, shops, bars and restaurants, retained both an old world charm and a cosmopolitan vitality. A small and compact city, the centre is closed to traffic during the daytime so that streets and attractions may more easily and safely be accessed by walking trails or from April to October with a guided tour.

Canterbury’s corner of the county of Kent (the “Garden of England”) is rich in charming villages and glorious countryside, which is easy to explore by car, bicycle or public transport. Take a leisurely stroll in the nearby coastal towns of Herne Bay with its splendid seafront gardens and Whitstable with its working harbour and colourful streets of fishermen’s cottages.

Canterbury is easily accessible by both road and rail, please try our UK Travel Guide for further information.

Suggested Itineraries for days out in Canterbury

Each itinerary would take approximately 1 day to complete, but can be adapted to fit a half day visit if necessary.

One: the past is history

Take a walking tour of Canterbury with an official guide (Tel 01227 459779) finishing at the Visitor Information Centre in the Buttermarket. From there it’s a short stroll across to the Canterbury Heritage Museum in Stour Street and where you can see the city’s 2000-year history – from Romans to Rupert Bear – unfold. Enjoy a hearty lunch at a local pub or restaurant and then walk it off with a visit to the unmissable and unequalled Canterbury Cathedral.

Two: the city from a different perspective 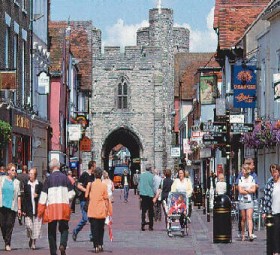 Walk along the city walls to the ruins of Canterbury Castle in Castle Street. Stroll down Castle Street to the High Street, stopping en route for a cappuccino at Castle Arts Gallery and Café. Then on to the Visitor Information Centre in the Buttermarket (Cathedral Entrance) to pick up a Queen Bertha’s trail leaflet and perhaps buy a few postcards and stamps. Return to the High Street and head for the West Gate Museum and an unrivalled view over Canterbury from the battlements. After a spot of lunch, head for the Buttermarket and follow Queen Bertha’s Trail through Canterbury’s UNESCO World Heritage Site (Cathedral, St Augustine’s Abbey and St Martin’s Church).

Three: St Augustine and the birthplace of Christianity

Follow the special St Augustine walking tour offered by the Guild of Guides (must be pre-booked, see page 25) ending at St Augustine’s Abbey. Enjoy lunch in a local pub or restaurant and then head back into the city centre and enjoy a stroll around the cathedral precincts and a visit to the cathedral. Enjoy a cream tea in one of the nearby coffee shops.

Explore the hidden Roman Canterbury that exists beneath street level with a visit to the Roman Museum in Butchery Lane. Then travel forward in time at the Canterbury Tales Visitor Attraction, where you can experience the sights, sounds and smells of medieval Canterbury in the company of Chaucer’s band of pilgrims. Have lunch in one of the excellent local pubs or restaurants, then make your own pilgrimage to the Cathedral. Why not stay to Evensong and hear the world famous Cathedral choir sing in this magnificent setting?