I once took home a bundle of Arum Lilies, discarded from the greenhouses of a local nurseryman. Only once. The moment my mother spotted them she threw a tantrum of monumental proportions and bodily evicted myself and the blooms. Why? Because in her view Arum Lilies are the Death Flower, and their presence in the home is an unerring harbinger of death in the family (though she could accept their popularity as a bridal bouquet flower without question).

Lilies, however, weren’t the only flower to draw my mother’s disapproval, as well as that of many of her generation. For instance, she wouldn’t allow may blossom in the house before May morning had passed. Nor were milkmaids (cuckoo flower or lady’s smock) permitted because it was recognised as a fairy flower. It was said that milkmaids were the only flowers excluded from may garlands for fear that the wearer would be dragged under the hill to Faeryland.

White bryony is said to scream when pulled from the ground, in the same way as mandrake (which it’s often falsely called), and was also claimed to be unlucky in the house. Yet in Cambridgeshire white bryony’s human torso-shaped root was the object of a pub competition to find the most womanly specimen. The winning womandrake, as it was often called, was hung in the bar until an even more realistic sample could be found. The runner-up roots in these ribald contests weren’t wasted, however; and were stashed in their finder’s money boxes to ensure increases to the family income.

Cow parsley is often called Devil’s parsley; its close resemblance to hemlock (a highly poisonous white flower closely linked with witchcraft) may have some bearing. Like sweet woodruff, cow parsley has the reputation of “breaking your mother’s heart”. This adage is said to have come about because the tiny white blossoms drop quickly. In the days before vacuum cleaners, the temptation for mothers to ban these work-generating posies from the parlour was understandable.

There’s little doubt that many superstitions have similarly prosaic origins. Pollen dropped from lily stamens will stain almost anything; hence, perhaps, the aversion to arums. My mother was a Welsh Chapel stalwart, and as stoic and sensible as they come. To accuse her of being superstitious would have brought on a tsunami of denial.

Ignoring any extra housework, white flowered plants have their practical aspects. Chamomile tea is famous for its calming properties, and its relative, Feverfew, has long been advocated as an efficient remedy for migraine. White horehound is said to be an efficient cough cure, and ramsoms (wild garlic) is proffered as the cure for almost anything if you consult enough herbals.

Many plant-based myths seem to involve protection from, or for, witches and fairies, which in turn are euphemisms for ancient deities and their acolytes; today’s Wiccans hold white to be the colour of the Goddess. Four trees in particular are associated with the old religion and so, by default, with Witchcraft.

Blackthorn (sloe – pictured right) is often referred to as a witch’s tree. As late as the 1940s, anyone seen to carry a blackthorn walking stick was suspected of being a witch. A blackthorn staff pointed at a pregnant women or animal was said to cause immediate miscarriage, or cause crops to whither. In contradiction to this, in many places (e.g. Sandwich, Kent) blackthorn staffs are carried as a badge of civic office.

It wasn’t just my mother who wouldn’t allow may blossom in the house too early in the year. May, or hawthorn, brought into the house before Mayday is widely associated with bad luck. In many places, however, the first person to bring flowering may indoors on Mayday was assured of good fortune. May was said to bloom at the festival of Beltane (Mayday) to mark the return of summer, although the calendar changes of the 18th century did mean that may flowered before then. This Goddess tree was used to decorate springs and glades – and that belief was transferred to Christianity to adorn holy wells (often the same as pagan springs), the most famous Christian Hawthorn being that of Glastonbury.

In most places, rowan is well known for its protective qualities against witches and fairies, and is believed to be the primary tree of power by ancient Celts. It was called the moon tree in northern myths, when the frosts at the winter solstice, would leave stars clustered among the upper branches in what may well have been the forerunner of our Christmas tree tradition.

Rowan (and hawthorn) boughs were laid across lintels on solstice days to reinforce the beneficial qualities of the plants and to bestow good fortune on the dwelling. 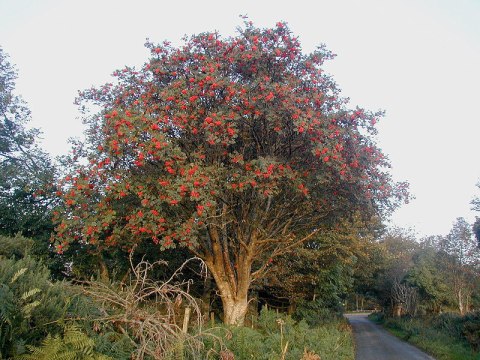 Elder has a myriad medicinal uses from cough syrup to insect repellent, but one little-known folklore connection is that dried elder leaves were used in place of tobacco and were said to be preferred because of their relaxing properties; however botanist and physician William Withering reported in 1776 that the plant “should be avoided, and not slept under or near, due to its narcotic smell”. Perhaps the elder’s most famous folklore connection comes from the Rollright Stones in Oxfordshire where it was traditional on midsummer eve to gather around the King Stone and cut the elder flowers (‘bleed the elder’). The King Stone would then move his head. This arises from the legend that a Danish king, going to fight for the English crown, asked an elder tree witch what his fate would be. She replied by turning the king and his army into stones, thus preventing them from going into battle. The stone circle is surrounded by elders to this day.

Just four examples of trees associated with witchcraft; and all have white blossom. However, white has been the traditional colour of purity and innocence in western cultures for centuries, as well as being a symbol of healing.

Wouldn’t the world be a drabber place without a little white magic?