The history behind Netflix’s “Viking: Valhalla”

Landing in their longships on Netflix this Friday (February 25, 2022), is The History Channel’s ‘Vikings’ spin-off, ‘Vikings: Valhalla’. 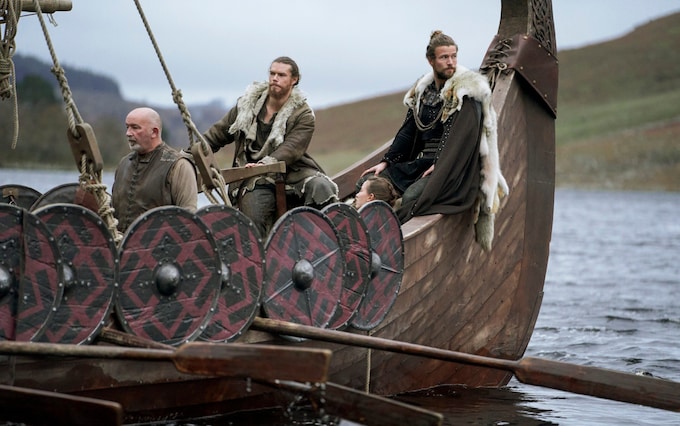 What is “Vikings: Valhalla” all about?

The official Netflix Synopsis tells us:

“Set over a thousand years ago in the early 11th century, Vikings: Valhalla chronicles the heroic adventures of some of the most famous Vikings who ever lived — the legendary explorer Leif Eriksson (Sam Corlett), his fiery and headstrong sister Freydis Eriksdotter (Frida Gustavsson), and the ambitious Nordic prince Harald Sigurdsson (Leo Suter).

As tensions between the Vikings and the English royals reach a bloody breaking point and as the Vikings themselves clash over their conflicting Christian and pagan beliefs, these three Vikings begin an epic journey that will take them across oceans and through battlefields, from Kattegat to England and beyond, as they fight for survival and glory.

Set over a hundred years after the end of the original Vikings series, Vikings: Valhalla is a new adventure that blends historical authenticity and drama with gritty, immersive action.

When is “Vikings: Valhalla” set?

‘Vikings: Valhalla’ is set is set approximately between 1002 and 1066, covering the final years of the Viking Age that ends with the Battle of Stamford Bridge in 1066.

Co-creator and showrunner Jeb Stuart has claimed he found the “exciting new entry point” for the series in his research of the St. Brice’s Day Massacre,  a little known event in English History that took place on 13th November 1002 and earned King Aethelred the nickname Aethelred the Unready (or ill advised).

Who are the historical figures in “Vikings: Valhalla”?

Also known as Leif the Lucky, the Icelandic/Norse explorer who is thought to be the first European to set foot on continental North America, half a millennium before Columbus and even before Welsh legend, Prince Madog, who is rumoured to have landed in what is now Alabama in the USA in the 12th century.

Sister of Leif Eriksson, an early colonist of Vinland (an area of coastal North America explored by Vikings). The Netflix character description states that she is “fiercely pagan, fiery and headstrong”, Freydis is a staunch believer in the “old gods” which rings true to the Icelandic sagas that portray Freydis as a strong willed-woman.

King of Norway from 1046 to 1066, often known as “the last real Viking“. His death at the Battle of Stamford Bridge is now regarded as marking the end of the Viking Age. The Netflix character description states: “Harald is one of the last Viking berserkers.  Charismatic, ambitious and handsome, he is able to unite both followers of Odin and Christians.”

King of Denmark. Son of Sweyn Forkbeard, the first Viking king of England (who ruled for just 5 weeks) and King of Denmark from 986 to 1014. A Danish prince, Cnut won the throne of England in 1016. His later accession to the Danish throne in 1018 brought the crowns of England and Denmark together. The Netflix character description states: “His ambitions will mold the course of history in the 11th century and make him a defining figure of the Viking age”.

Olaf is Harald’s older half-brother and King of Norway from 1015 to 1028. Olaf is an “Old Testament” Christian and has traditionally been seen as leading the Christianisation of Norway.

The lesser known Kingmaker and the ultimate survivor. Godwin was granted the Earldom of Wessex by King Cnut, pulling him out of relative obscurity in the annals of history. Earl Godwin is also father of King Harold Godwinson.

The first wife of King Canute and mother of Harold Harefoot and regent of Norway from 1030 to 1035. The Netflix character description states: “Calculating and ambitious, Queen Ælfgifu of Denmark has a hand to play in the political power struggles unfolding in Northern Europe. She uses her charm and guile to great effect as she promotes the interests of her Mercian homeland and tries to assert herself in Canute’s growing power structure.”

A Norman-born noblewoman who became the English, Danish, and Norwegian queen through her marriages to the Anglo-Saxon king Æthelred the Unready and the Danish prince Cnut the Great. She was also mother to Edward the Confessor and Harthacnut and was at one time the richest woman in England.

King of England from 978 to 1013 and again from 1014 until his death in 1016. Æthelred became King aged about 10, but fled to Normandy in 1013 when Sweyn Forkbeard, King of the Danes invaded England. Æthelred returned in 1014 after Sweyn’s death. The remainder of Æthelred’s reign was one of a constant state of war with Sweyn’s son Canute.

The son of Æthelred. Following the death of his father, he was chosen King by the good folk of London. The Witan (the king’s council) however elected Canute. Following his defeat at the Battle of Assandun, Edmund made a pact with Canute to divide the kingdom between them. This treaty ceded control of all of England, with the exception of Wessex, to Canute. It also stated that when one of the kings died the other would take all of England…

How many episodes will “Vikings: Valhalla” air?

The 1st season will be landing on Netflix THIS FRIDAY February 25, 2022 and consists of 8 episodes. In total 24 episodes have been ordered so far and is thought to be split into 3 seasons.

Considering ‘Vikings: Valhalla’ is set approximately between 1002 and 1066, this means it will cover a tumultuous time in English history.

The history behind “Vikings: Valhalla”…

Here are our bitesize articles with some great history from this era:

The five boroughs of Danelaw were the five most important towns existing under Danish law and customs, located in the territory of...

Scourge of England and France, father of the Great Heathen Army and lover to the mythical queen Aslaug, the legend of Ragnar Lothbrok...

If there was one thing the primarily Saxon inhabitants of Great Britain were accustomed to in the 8th century, it was raids on their shores by the men of the north, the so-called Vikings. Since they first landed in Norfolk in 787 AD...